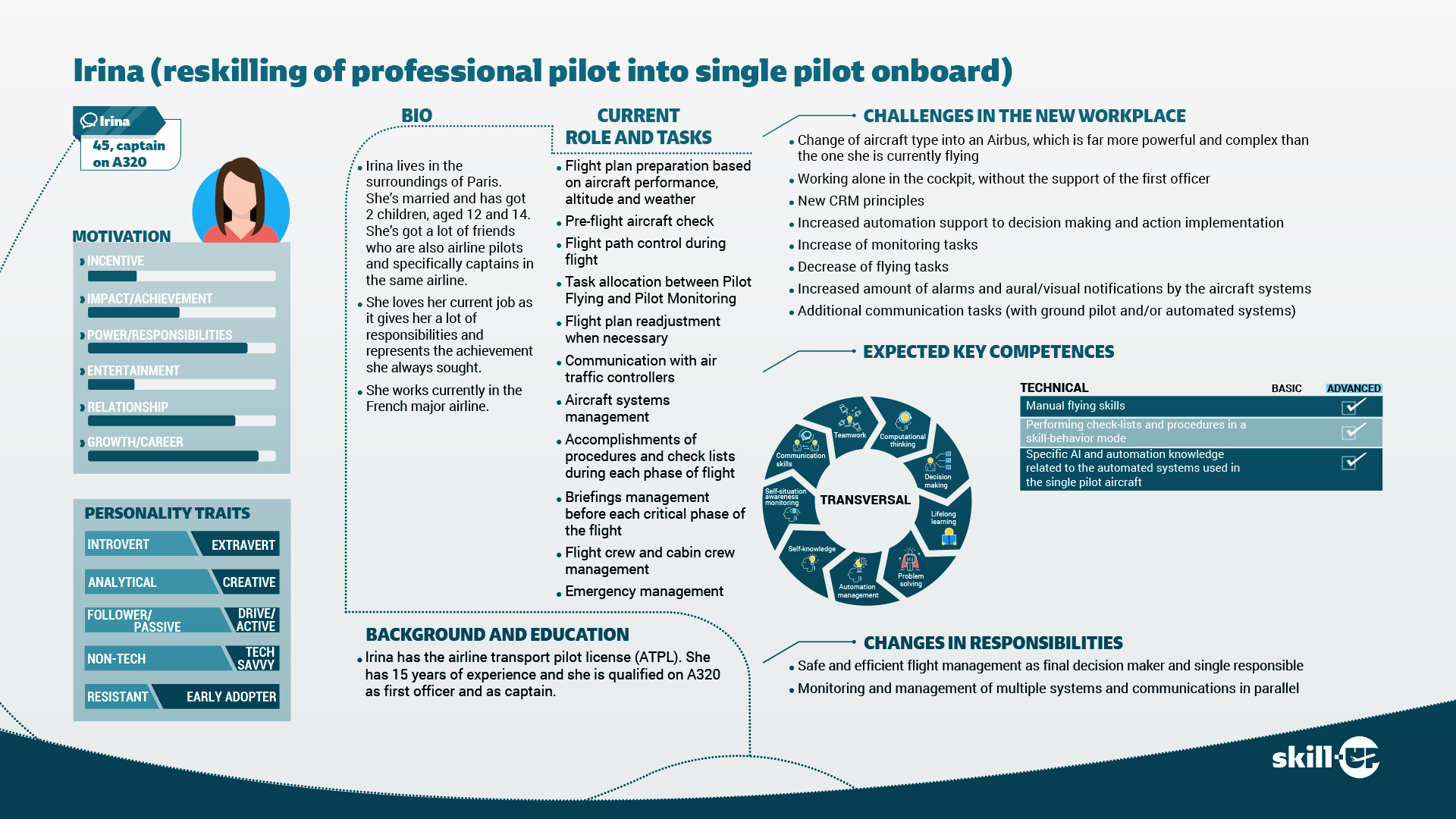 Posted at 12:03h in News by Inovaplus

👉Irina, a professional pilot to be reskilled into single pilot onboard

👉Roberto, a senior professional pilot to be reskilled into ground pilot 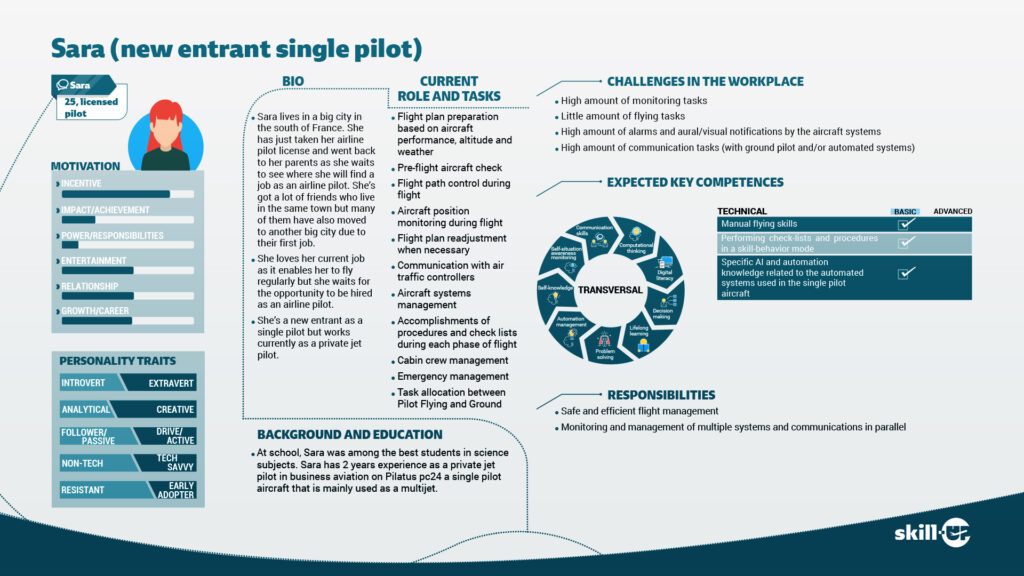 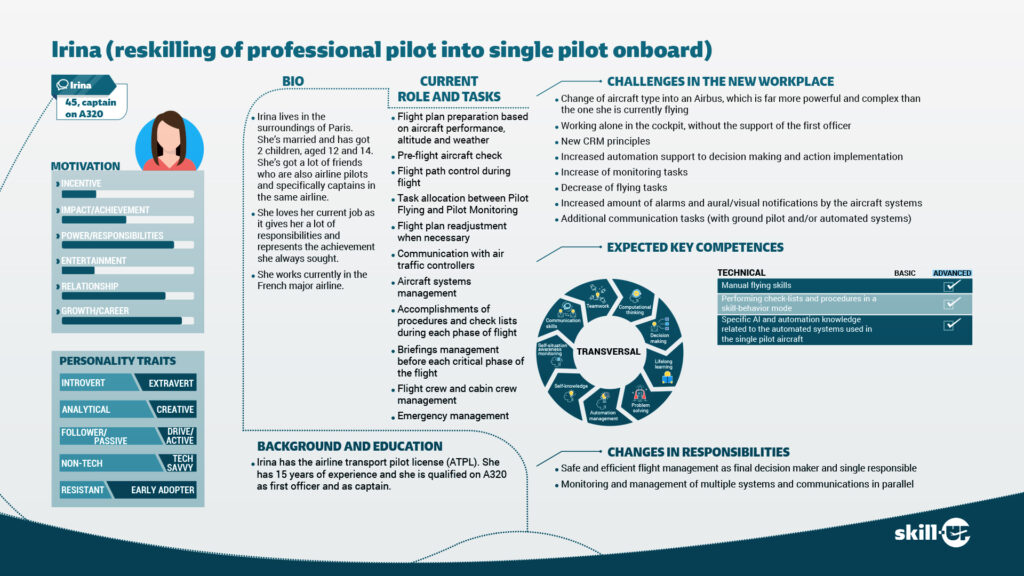 The Sara CA Persona was developed to represent the professional profile of a new entrant single pilot, namely a young pilot who has a short experience in business aviation. She is qualified on a jet aircraft that is certified as a single pilot aircraft. Thus, she has alread y been trained to fly as a single pilot. However, in business aviation this aircraft is mainly used as a multijet. Therefore, Sara’s experience is mostly based on multiple crew piloting. Sara was imagined as an early adopter of new technologies and very keen on discovering new systems and applications. Her training needs are expected to get used to the change in activities due to the increase of the monitoring activities, especially the monitoring of new and complex automated systems. Hence, she will need to have several competencies around automation management: general automation management (being aware of the risks of complacency, over-reliance on automated systems…), situation awareness of the whole system including one-self, computational thinking in order to better understand how an automated system is functioning and digital literacy. In addition, she will need to have specific competencies regarding the automated systems that will be effectively used in the new type of aircraft she will pilot. She will also need to train her manual flying skills in order to counter the side effect of the increase of automation and to be able to fly the aircraft manually in case of automation failure. Communication skills will also need to be trained as she will be like ly to have to communicate efficiently with the ground pilot. Finally, in order to have the more available resources to monitor the systems, she will need to be able to perform other activities as much as possible in a skill-behaviour mode, i.e based on automated cognitive processes that require less selective attention and cognitive resources. In particular, check-lists and procedures will need to be performed in that mode.

The Irina CA Persona was developed to represent the profile of a professional pilot, who has to be reskilled into a single pilot onboard. Irina was imagined as an experienced captain of a major airline. Thus, she has been trained and has built her experience on flying an aircraft with a multiple crew. She is used to a clearcut separation between the pilot flying activities and the pilot monitoring activities. She is also used to discuss all the important decisions with the other flight crew member and to cross-check all the actions required by the procedures and the check -lists. Her training needs are expected to deal with knowledge about automated systems, both general (risks of complacency, over-reliance on automation, but also the need to have a minimum trust in automation) and specific (new automated systems related to the single pilot aircraft). She will need to be trained on having a good situation awareness and specifically on monitoring her self -situation awareness. Indeed, safety will rely even more strongly on her self knowledge of her mental state and her level of situation awareness. Finally, communication skills will also need to be trained as she will be likely to have to communicate efficiently with the ground pilot. 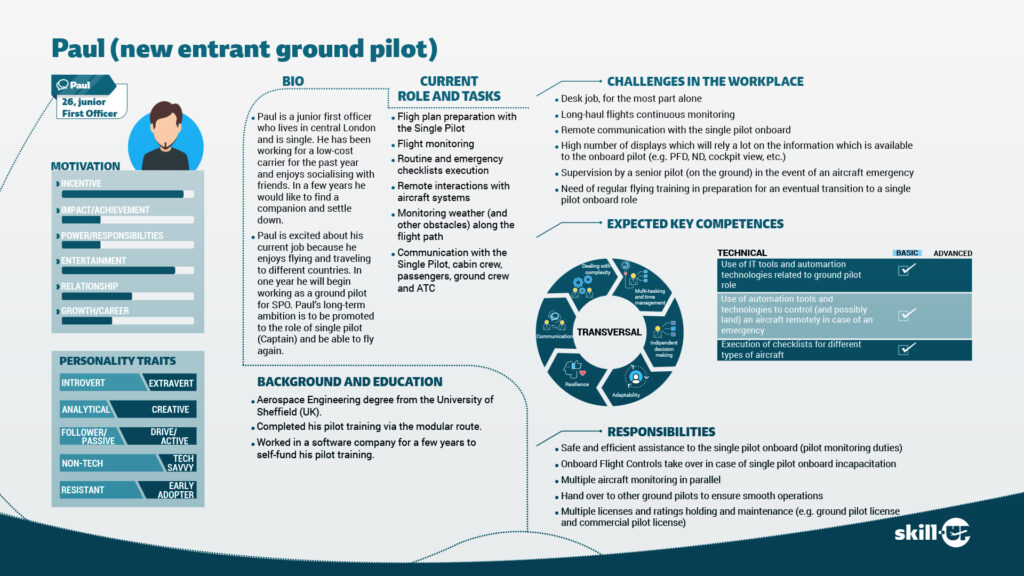 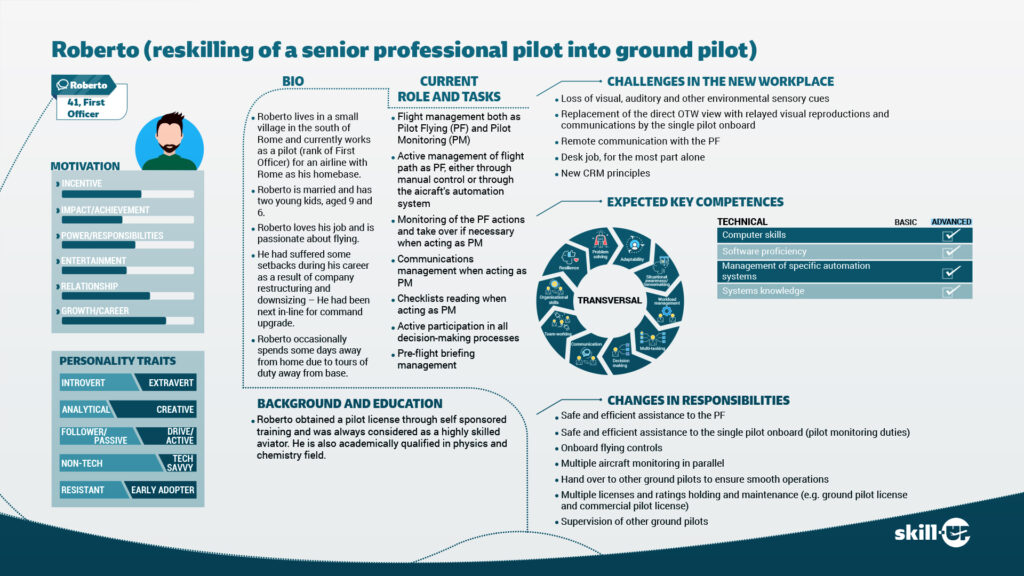 The Paul CA Persona was developed to represent the profile of a junior commercial pilot who is in the initial stage of his flying career and who will need to be trained as a ground pilot. Paul is an outgoing individual who became a pilot because of the sense of adventure that this job offers and therefore the ground pilot role will be less exciting to him, but he understands that it is a necessary step on his journey to become a single (onboard) pilot. Paul is very comfortable with new technology and will therefore not find it difficult to learn how to use the various automation systems which will be available to him as a ground pilot. On the other hand, Paul will fi nd it more challenging to work on his own and to build a mental picture of the state of the aircraft which he will be monitoring remotely. This is because Paul is used to working with another pilot in the cockpit and, in his ground pilot role, he will be deprived of several cues which are available to the onboard pilot. Additionally, Paul may have to monitor different aircraft at the same time and hand over to another ground pilot at the end of his shift. Paul’s technical training needs are expected to include the use of IT tools and automation related to his ground pilot role, including automation to take over an aircraft in the event of onboard pilot incapacitation. On the other hand, Paul’s transversal training needs will include multi-tasking, time management, communication and independent decision making.

The Roberto CA Persona was developed to represent the profile of a senior professional pilot who has to be reskilled for the role of a ground pilot. Roberto was thought of as being an experienced pilot who already had enough flying experience to be considered for command upgrade, but had suffered some setbacks because of company restructuring. The role of the ground pilot may therefore be felt as yet another setback for Roberto, and his motivation may be affected. He would also have to adjust to an environment in which some of the sensory cues he would have had on board an aircraft would no longer be available directly, and would have to rely either on information supplied by the single pilot on board or on data from multiple sensors on the aircraft. This new environment may thus pose an additional challenge in maintaining a high level ofsituational awareness. Since Roberto would lose the direct interaction with the Captain, which he was used to in the traditional two person cockpit, he would have to adjust to a new and different team working environment. Roberto is thought of as having to spend some day s away from home
because of his current role, and thus may view the ground pilot role as an opportunity for improving  his work-life balance. Roberto’s training needs are expected to deal with IT and computer skills, software proficiency and management of automation systems from a technical competencies point of view. The new environment means that, amongst the transversal competencies, the top training needs will be in situational awareness and sensemaking, workload management and multitasking, decision making, communication and teamworking.

This website uses cookies to improve your experience while you navigate through the website. Necessary cookies are stored on your browser as they are essential for the working of basic functionalities of the website. We also use third-party cookies that help us offer you a better service. These cookies will be stored in your browser only with your consent: you have the option to opt-out of these cookies, but opting out may affect your browsing experience.
Necessary Always Enabled

Any cookies that may be not be particularly necessary for the website to function and are used specifically to collect user personal data.